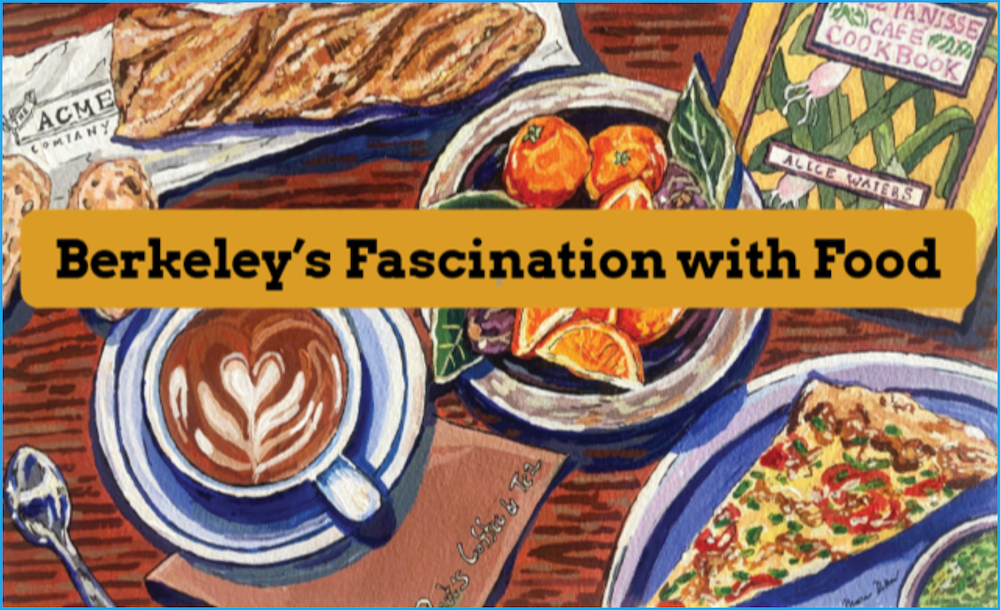 Sitting around the dinner table after a good meal of local food and wine, four Berkeley neighbors and good friends—Michael Corbett, Mary Hardy, Scott McCreary and Renée Robin—discussed an item in the day’s news: the USDA had issued new nutrition guidelines, rendering obsolete the old food pyramid posters hung on classroom walls. The group began imagining a design for a Berkeley-specific food pyramid, a tongue-in-cheek graphic that could capture Berkeley’s unique attitude toward food. It was easy to agree on certain elements—coffee would have the primary place—but it was not as easy to reach consensus on which items to include and where to position them in the hierarchy. The challenge dominated conversation during many more shared meals.

Consensus was never reached, but after months of good-humored back and forth, the women quietly enlisted Berkeley graphic designer Noreen Rei Fukumori to illustrate the concept, and had it printed onto t-shirts as holiday gifts for the two men. In keeping with the original concept, the shirts were printed in Berkeley by local union labor on 100% organic cotton, using natural dyes.

The Berkeley Food Pyramid remained, for the most part, an inside joke until the summer the families brought their t-shirts to U.C. Berkeley’s Lair of the Bear family camp. That year, Russell Greenberg, director of the Smithsonian Migratory Bird Center, gave the Camp Blue fireside chat about conserving American songbirds. He stressed the need to buy shade-grown coffee in order to preserve the birds’ Central American winter habitat, threatened by industrialized coffee plantations. When Dr. Greenberg’s wife spotted the Berkeley Food Pyramid with coffee at the apex of the pyramid, she decided Russ—a proud CAL alumnus—needed to have that t-shirt.

Russ Greenberg wore his Berkeley Food Pyramid t-shirt around Washington, D.C. and the Smithsonian for several years. Eventually well-worn and faded, the t-shirt caught the attention of Nanci Edwards, a curator at the Smithsonian, who was planning an exhibit to coincide with the permanent installation of Julia Child’s kitchen. The Berkeley Food Pyramid became part of that exhibit at the National Museum of American History—“Food: Transforming the American Table 1950-2000.” While viewing the exhibit, members of the publicity team for Peet’s Coffee & Teas spotted the Berkeley Food Pyramid. The team was planning the celebration of Peet’s 50th anniversary and intended to spotlight Peet’s origin at the heart of Berkeley’s Gourmet Ghetto. They incorporated the Berkeley Food Pyramid in their publicity campaign, and today, Berkeley Food Pyramid posters hang on the wall at a number of Peet’s throughout the Bay Area and beyond. The graphic still elicits chuckles and comments about which food items should, or should not, have been included.

Information about Berkeley Food Pyramid products and ordering can be found at berkeleyfoodpyramid.com.